The S&P 500 has been traversing the same territory for months.  It has formed a substantial high-volume area with a peak near 2103.  This prolonged consolidation is very mature and a move to exceed one of the extremes increases in likelihood every day.  While below the peak of this mature high-volume area (2103), the index is leaning toward a downside resolution.

The critical zone of support for the S&P 500 index remains at 2034 – 55.  This continues to be an important zone as a breach of 2034 would shift the bias to bearish and leave a formidable zone of resistance at the high-volume area that has been building since March.

Following a lengthy consolidation such as we have seen over the first half of this year, the eventual resolution (either up or down) will mark a significant event and establish the future direction of the stock market and a persistent and directional move is my expectation once we do get a resolution.

The Nasdaq-100 has moved back inside its zone of rotation and the dividing line between a bullish bias and a rotational bias is again 4562.  There remains support back at 4325 – 4380 on any continued weakness and the ascending trend channel remains intact.  Critical support is 4280 and any breach of this level would shift the bias to bearish.

The breadth average remains range bound, neither extending above the ‘blue line’ nor dropping below the ‘red line’.  In order for the S&P 500 index to achieve sustainable new highs, I maintain that the breadth average has to make a move above the ‘blue line’ to confirm that the higher prices are broadly supported.  Alternatively, a move by the index that breaches support at 2034 would likely lead to a period of sustained low breadth readings below the ‘red line’.  In this bearish scenario, I would not anticipate a bounce in the S&P 500 when the breadth average touched to the red line if the index had breached 2034. 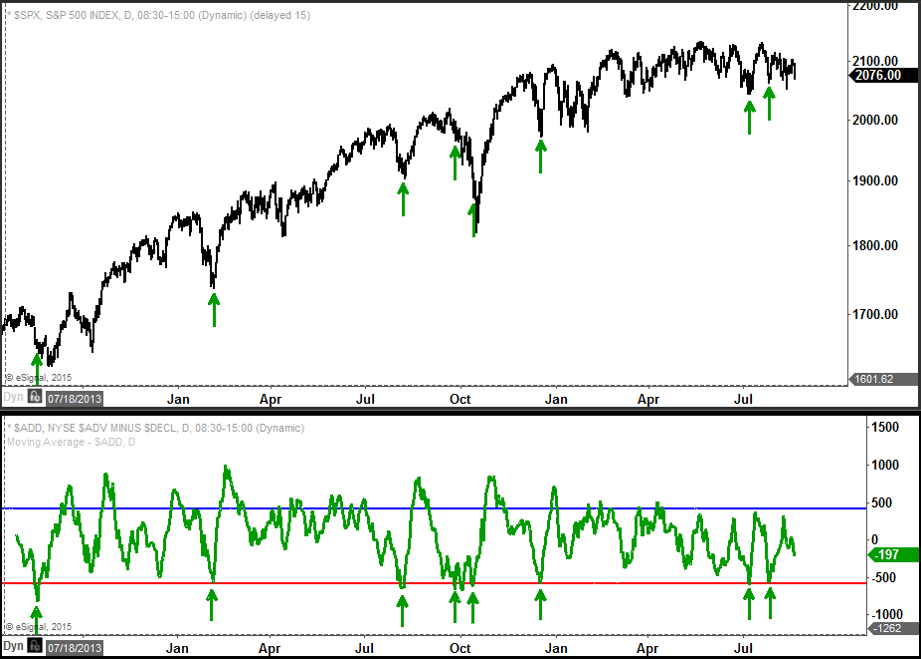 Each spike in the VIX into the 19 – 22 zone since late 2012 has marked a buying opportunity in the on-going, big picture uptrend.  The pullback in late 2014 exceeded this zone as did a few of the subsequent spikes earlier this year.  These also ended up to be short-term lows in the uptrend.  A change in this behavior would be a signal of a potential change in the trending character of the S&P that’s been in force for the last 3 years.

The area I have highlighted in yellow is the last half of 2007.  You can see that there were many spikes and maintained readings above 24 (with highs reaching 35 – 38 and very few readings below 19).  This preceded the significant price damage that came in 2008.  So the message is to be very wary if VIX were to spike higher than 24 and maintain above that level (or make repeated spikes into the mid 30’s), while on any rallies in the S&P index, remain elevated above 19. 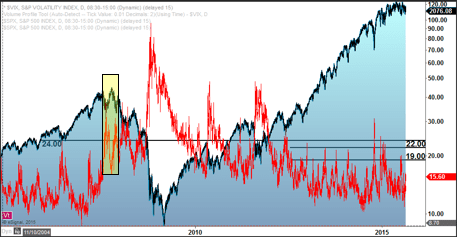 The S&P 500 has been in a long-standing multi-year uptrend. The zone of key support remains at 2034 – 55, which must remain intact to keep the long-term trend pointed upwards.

A failure to hold support at 2034 – 55 would be a signal that the character of the bull market we’ve been in for the last few years is changing.  That means a breach would suggest that the steady bull market could be shifting to a bear market (or a volatile rotational market).  For this reason, any breach of key support at 2034 – 55 would be a significant event.  A breach of 2034 would suggest a swift trip to and likely break of 1972.50 and potentially a test of 1820, which could also be in jeopardy in such a scenario. 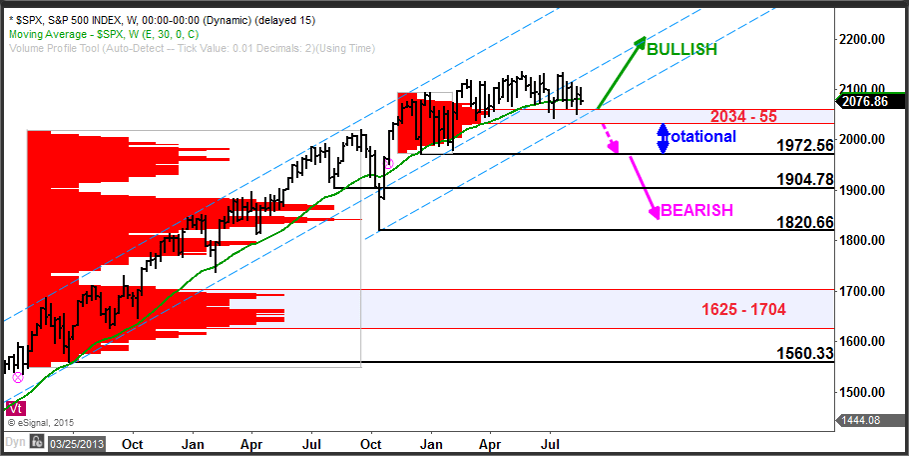 Time To Jump Back Into The Markets?