Forex (Foreign Exchange / FX) trading can be a great way to make some serious profits in a short period of time.

However, it is also a very risky venture that can lead to huge losses if you are not careful. In this article, we will take a look at the dangers of leveraged Forex trading and how to avoid them.

Forex is quite simple to understand – essentially, like most other investments, you’re buying a currency in hopes that it will increase in value so you can sell for profit.

So, for example, a person may decide to purchase 1 Aussie dollar for 70 US cents, and sell it in the future for 75 US cents, thereby generating a profit of 5 US cents, which is about a 7% return.

Of course, 5 US cents isn’t really anything to get excited about, so forex traders will typically magnify their returns not only by increasing their capital, but also taking on leverage, which as we discussed previously at the start of this series of posts about leveraged investing, is borrowing money to trade. 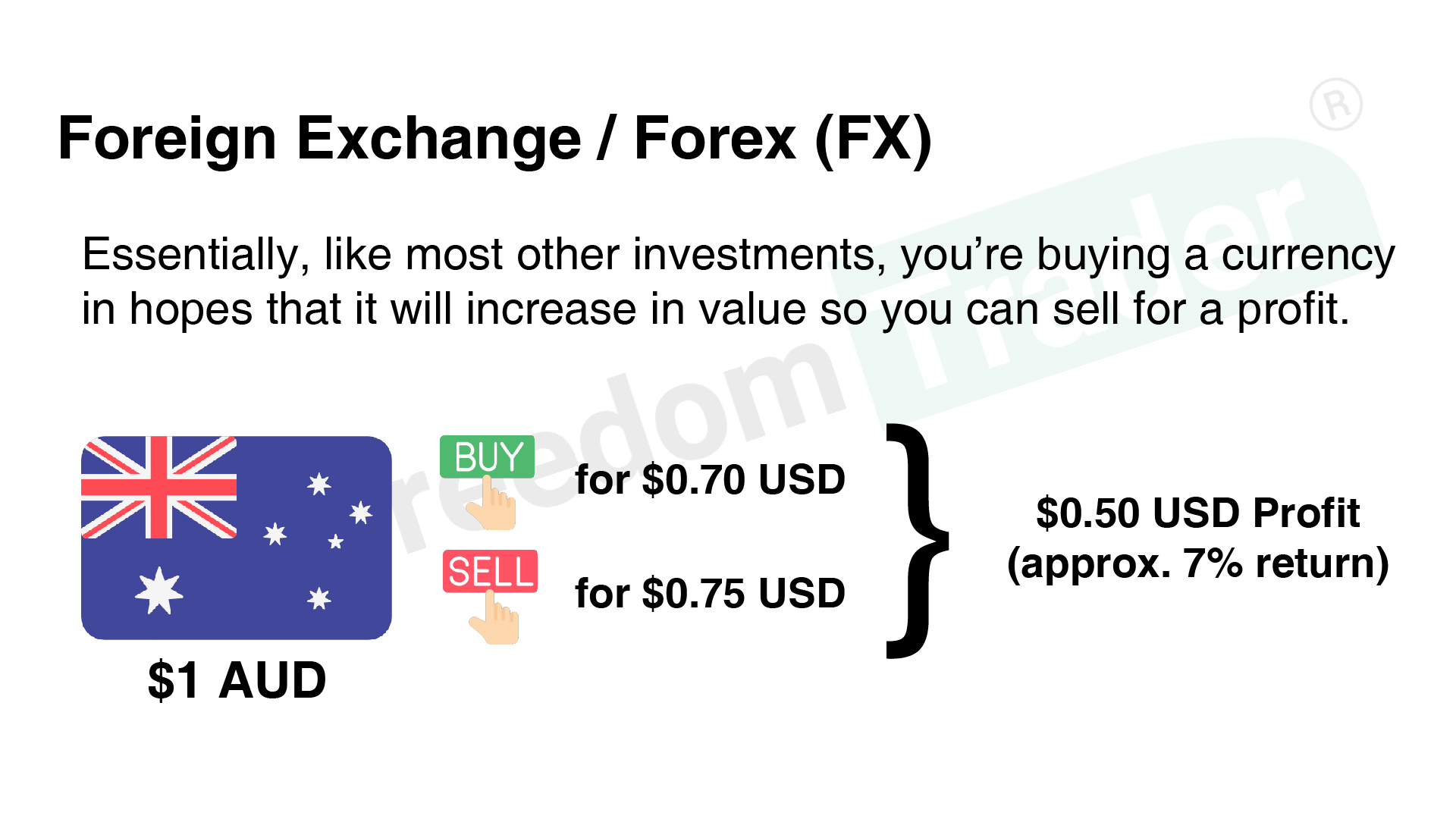 The typical margin rate for Forex traders can range from about 3.33% to 0.2%, which means you can borrow 30 to 500 times your existing capital.

Which, just like our CFD example from an earlier post, means you can greatly magnify your returns. 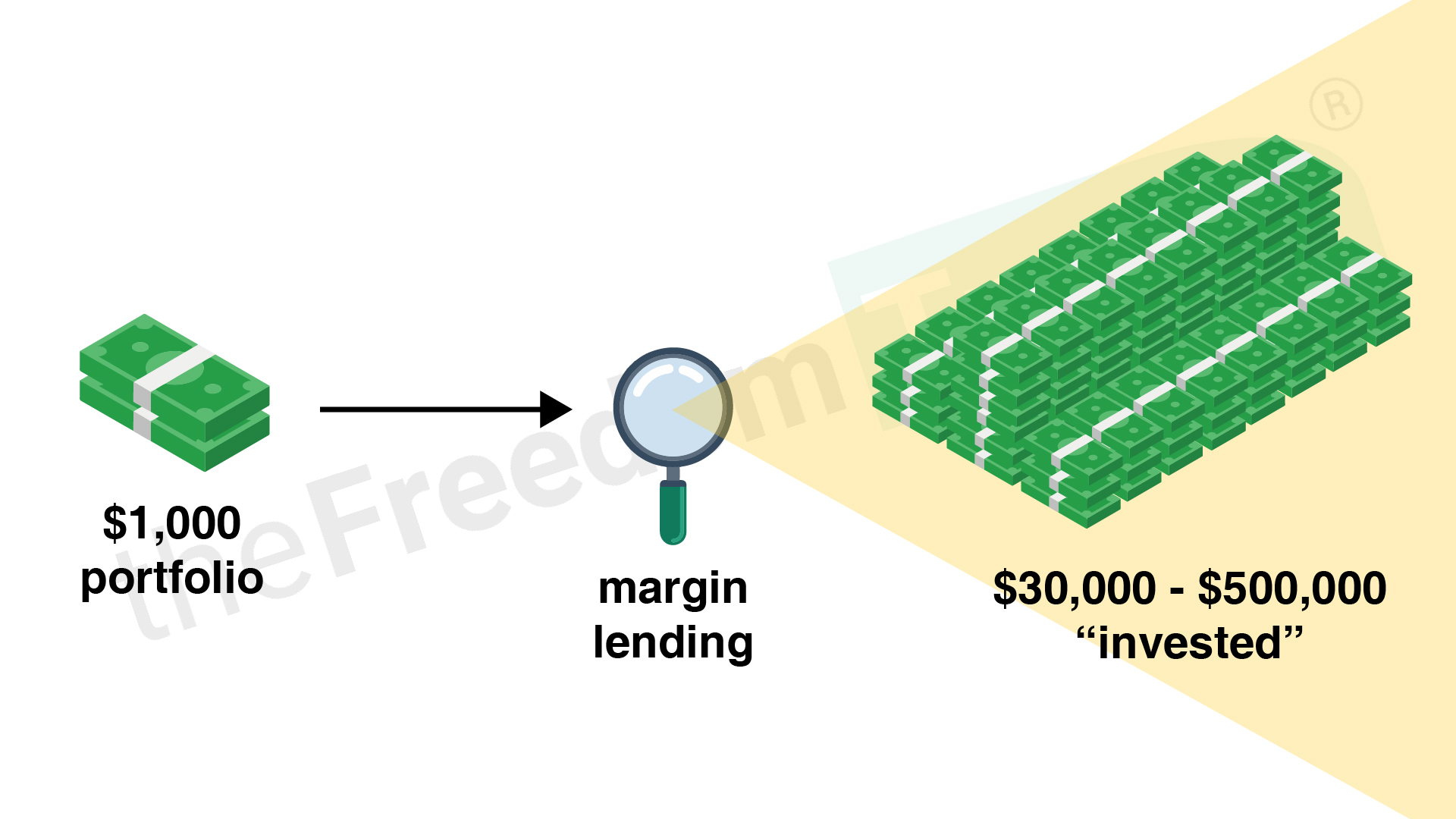 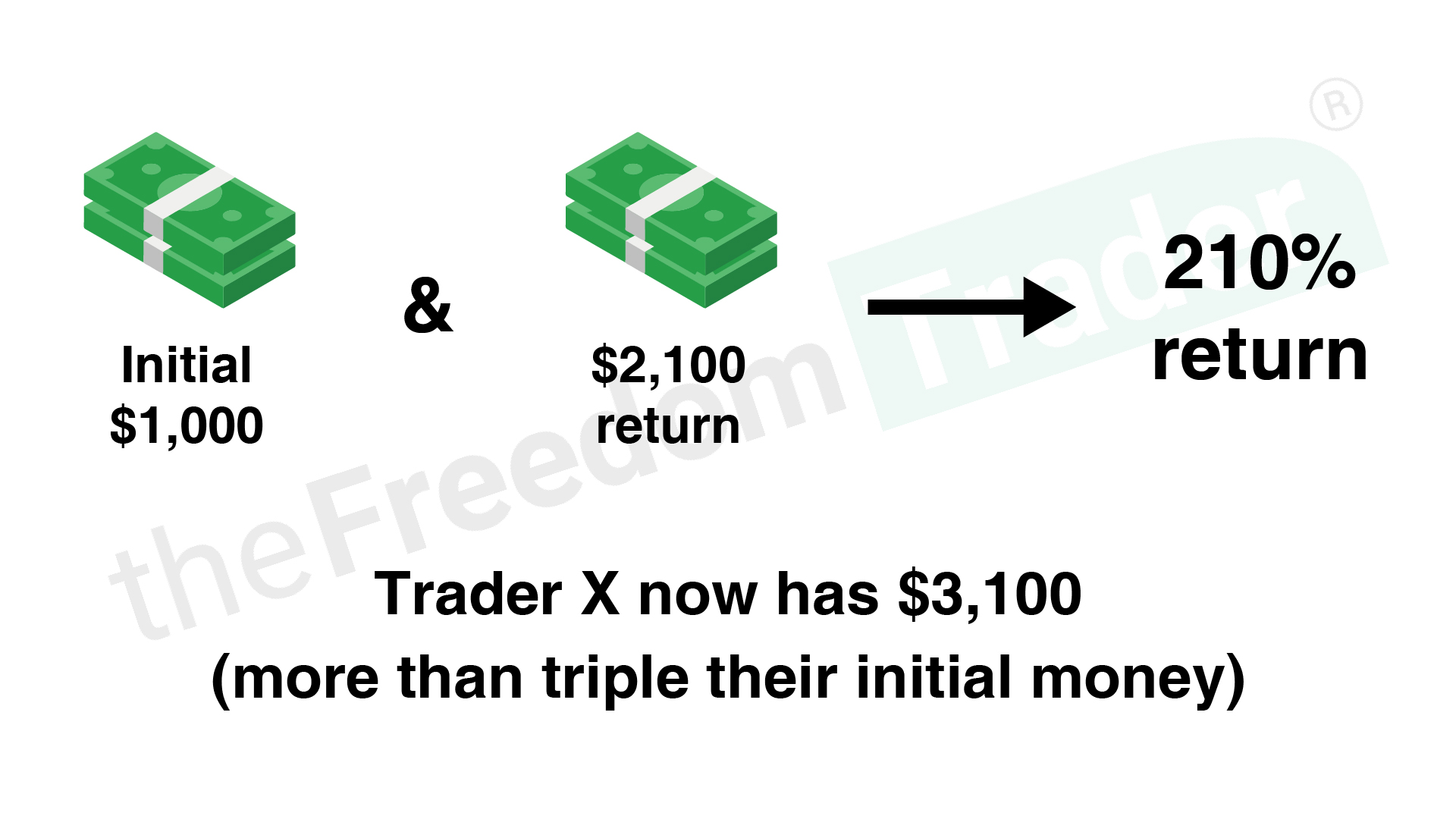 Why Is Trading Forex Dangerous?

That means Person X now owes $1,100, and at this point would receive a margin call notification to top up their account in order to keep their forex position open.

In other words, just like any other form of leveraged trading, while you can magnify your wins, you can also greatly magnify your losses and lose your entire account with one wrong trade.

However, it doesn’t stop there for Forex.

There are a few other factors involved with Forex as well that add to its risk. 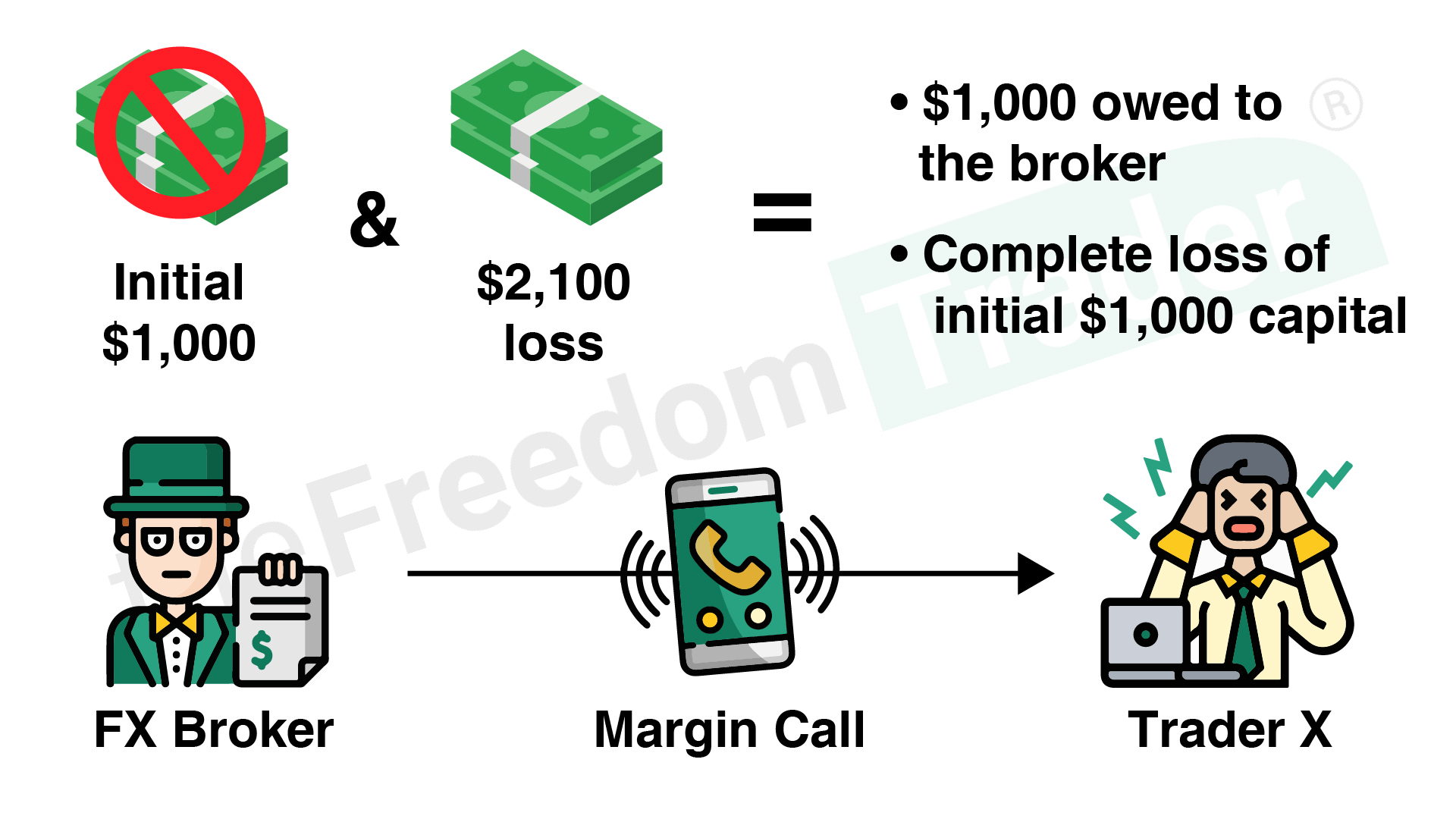 The first is that while stocks are value-oriented, Forex trading is pretty much limited to speculation. Instead of trading ownership of companies with stocks, with Forex you are swapping currencies, which is much more difficult to predict than stocks and as such can be much more volatile investments.

In other words, while stocks are real businesses with assets and employees that provide goods and services to people, there is no real underlying value to currency.

To paint the picture, while with stocks you can look into how the company is run, how the finances are managed, what their market share is and what plans they have for the future… with foreign exchange, information is much more limited to things such as international trading trends and technical analysis, which are highly speculative in nature.

This is a risk that most traders of Forex don’t consider.

The second factor that most Forex traders don’t think about is related to the first.

Because Forex isn’t really based on something with long-term value, you can really only succeed with it through short-term, speculative trades. This means that unlike growth stocks, you cannot have a passive, long-term buy-and-hold investment strategy with Forex.

As a result, while you can still succeed with Forex trading, you would have to spend long periods of time in front of your computer every day, monitoring trends and technical indicators in order to enter and exit at the right time.

Not exactly a life of freedom.

Thirdly, unlike the stock market, which is heavily regulated and monitored by bodies such as the Securities Exchange Commission (SEC) in the USA or the Australian Securities and Investments Commission (ASIC) in Australia, foreign exchange markets aren’t really regulated, if at all.

Most foreign exchange is conducted what professionals call Over The Counter (OTC), which basically means trades are done directly between 2 parties without supervision as opposed to through an intermediary party such as a broker.

This means there is a higher chance you can be subject to unfair and unethical behaviour from buyers and sellers.

Things are starting to change, and more regulations are slowly being introduced at the time of this recording, but that is another downside many people don’t think about as well.

Finally, perhaps one of the biggest risks that will only continue to rise in the future is the appearance of algorithmic traders – in other words, corporations that use computer software to transact buy and sell orders automatically after calculating patterns and probabilities in micro-seconds.

Like I mentioned before, succeeding with Forex is possible if you are willing to spend hours in front of the computer screen analysing technical trends. But when you compare the performance of a solo human being against a computer that makes calculations 24/7 and has teams of full-time PHD-qualified scientists and engineers operating on it, you simply cannot compete.

And while the emergence of such algorithmic technologies is also true for stock price movements, as individual investors and traders, we still have the opportunity to compete with large funds in the medium to long-term, due to our size.

I won’t go into much detail here, but I’ve written about why that is on a separate post, which you can click to read here.

So as you can see, in addition to the risk of potentially wiping out your account with just one wrong trade due to leverage, Forex also has the risk of:

The next time you hear a friend or a family mention Foreign Exchange, Forex, or FX as part of their investing and trading, have a conversation with them about it to make sure they really understand what they’re getting into…

At the end of the day, it’s entirely up to you to make the decision, however, all of the above reasons are why I personally choose not to participate in Foreign Exchange trading.

Hopefully this post will help educate your friends and family on what’s really involved when it comes to Forex trading.

Effective Trading Solutions Pty Ltd trading as theFreedomTrader.com (ACN: 160 101 959) (“theFreedomTrader”) is registered in Australia and is a Corporate Authorised Representative (CAR No. 1267698) of Australian Financial Advisory Group Pty Ltd which is the holder of Australian Financial Services Licence No. 475300). All material provided on this website is general advice only and does not take into consideration your personal objectives, financial situation or needs. You should seek independent financial advice and read the relevant disclosure statements prior to acquiring our services. TheFreedomTrader.com does not operate as a formal training provider and is not registered as a training provider.